My dear friends I was out walking last Friday evening reflecting on what had been a very difficult day. We had just buried our brother Oliver and I had been informed by Mount Carmel Nursing Home that Br John was not well. As I walked I was very conscious of how short the days had become and the dark night approaching, the Autumn leaves falling to the ground and the general landscape all around me signalled the end of another season and another year and the approach of winter. It seemed to me as if nature was preaching a silent sermon about all beauty fading and passing away and about the fact that we are all destined to die. The sad part of the human story is that we are temporary residents in this world, and the grave, marks the end of all our earthly hopes and longings. We are born, we live our lives and we will die. A very bleak picture indeed if we did not have our belief and faith in the resurrection. Our Christian faith teaches us that death is not the end but rather a passage towards fullness of life.

We receive tremendous hope and strength when we turn to Jesus as we face the reality of death. Jesus’s words speak of a new reality that is beyond our comprehension. The promise of the Resurrection is a call to a whole new existence which is outside the scope of our imagination. This is the teaching of Jesus; this is the teaching of the Church. The funeral liturgy is a celebration of life – eternal life. The paschal candle which proclaimed the Resurrection of Jesus at Easter has burned silently by the coffin these last couple of days as a symbol of eternal life in the Lord. For a Christian death is a transition from what we know here and now to everlasting life. That is why we are united here today with Jesus Christ and the whole Church in offering the Eucharistic Sacrifice, the Mass. We pray in confidence that God may grant a kindly welcome to our departed brother and friend, Br John and that the bereaved may be comforted in their sorrow.

St Paul, his Letter to the Philippians, described death as going home to be with Christ forever. So we know from our Christian faith that death is not the end, but only the beginning of what really matters. We know in fact that no one who believes in Christ can ever really die. Today we are celebrating Mass and funeral rites for Br John. We use the word ‘celebrating’ because whenever we come together as Christians, in joy or in sorrow, we celebrate the fact that we are the family of the Risen Christ, and heirs to his promise of Eternal Life. In the Preface of the todays Mass we will hear the words: ‘Lord, for your faithful people, life is changed, not ended.’ This is our Christian belief. And this is why we have come here today, strong in our faith. We celebrate, I know, in sorrow. Our faith doesn’t sweep away the natural sadness we feel at what we call the ‘loss’ of our dear brother. It is right to grieve. It would be unnatural not to do so. What I am saying is not an attempt to take away grief. But I am also saying that Christian faith is deeper than grief. This is not to deny that death is sad, or that bereavement is not difficult. Death and bereavement, whenever they come, are always sad. They bring loneliness, pain, mental and emotional suffering. But our faith helps us to overcome the sorrow that death and bereavement bring about. Jesus Christ Himself wept at death; He wept at the grave of Lazarus, reminding us that grief is a perfectly Christian reaction to the tragedy of death. The sanctifying agent in this sadness, this heartfelt mourning that we share with Christ, is belief. When Jesus went to Lazarus’s tomb, he ordered the stone to be rolled away. But the others were horrified. They couldn’t understand why Jesus wanted them to do this, yet he said: “Did I not tell you that if you believe, you will see the glory of God?” That isn’t to say that we won’t be sad, that we shan’t mourn, that we shan’t ask why death must occur. But if we believe, our tomb shall also be opened, and Christ will give us life.  Now, just as then, we don’t understand why there must be death. There is still that impenetrable block between life and death. And it frightens us. But today’s Gospel gives us strength. Not only did Christ experience our fear, our sorrow, our mourning, he also showed us that death is not the end. It was a foretaste of his own resurrection, when he had to go through the valley of death himself, in real-time. Was he frightened? Yes. Was there part of him that didn’t want to endure it? Yes. But he did it, just as he raised Lazarus, because of love. We mourn for those whom we love. So mourning is a sign of love. Love is stronger than death. Love abides forever. It is not easy to say goodbye to someone we love, because when a loved one dies a little part of our life dies with them. So I would say to Rita and Nelly, and to all John’s relatives, that it is right that they should mourn, mourn a loving brother, an uncle and a life-long friend. It is right and natural too that there should be sadness at the pain of parting. John’s life on earth has run its course. But today is not just a day of leave-taking, but also in a real sense a home-coming. There will be a comfort and contentment in the years ahead that comes from recognising and accepting that God has called him home. A life has been well lived in the shadow of God’s presence in the monastery, the Word of God has been heard and pondered; the will of God has been done.

Practically all of John’s life was lived here in Mount Saint Joseph Abbey entering in August 1950 he gave his life to living the Cistercian way. A proud Limerick man John had many great attributes as a monk and person. I know most people will know John as the master baker, the man who for nearly 50 years with his great friend Br Oliver produced the legendary monastery bread. The monastery was synonymous with the “Brown Loaf” The 3lb circular loaves were part of the staple diet of the monastic community, the college, and the local community for many years. No one ever visited the guesthouse without going away with a wonderful loaf of monastery bread. It was a sense of great joy for John to say he was the baker, quickly followed up by his joke that he made all the dough for the monastery and never saw a penny of it! The two friends who could not be separated in life are once again united in death but they live on in our hearts. Another one of John’s many sayings was when asked about the life of a monk was “that it is a great life if you have the vocation.” And John certainly lived out his vocation with great humility and joy. John’s joy in living the monastic life was something that struck me from the first time I met him when I started visiting the guesthouse many years ago. There always seemed to a gentle joy in his heart and that unmistakable sparkle in his eye (with a little hint of innocent mischief). He embraced the simplicity of the life with a joyfulness that was contagious. I believe it was these traits that also made him so popular with the other residents and staff in Mount Carmel Nursing Home. But at the same time he took his call from God to the monastic life seriously and was a man who had a very deep faith. I remember one day not too long after I entered I was still a novice. It was a sunny Sunday and I met John sitting on the bench in the enclosure up by the greenhouse listening to a hurling match on his radio. After the match was over we sat there chatting with John telling me stories of life in novitiate when he entered. He was just recalling stories some funny, some just telling how hard the life was back then but all the time with a great sense of joy in the fact that he was answering Gods call and doing his will. I came away from that chance meeting with great admiration of the inner simplicity and joy with which he lived out his vocation. He will be reaping the rewards of that life well lived now.

So with thoughts of joy and hope rather than sadness, let us continue the Holy Sacrifice of the Mass for the repose of the soul of our departed brother, relative and friend, Br John. The message of this Mass, is that when death comes to our loved ones we are separated from them for a time, but we have not lost them. They have gone on a journey, a journey to eternal life. A Dominican preacher wrote a prayer in time of grief, saying: ‘life is eternal and love is immortal, and death is only a horizon, and a horizon is nothing save the limit of our sight.”We are saddened by their departure, but we are only saying ‘farewell’ to them, because we will be separated from them only for a while. We are saying goodbye, or rather ‘au revoir,’ as far as this life on earth is concerned, to one who for very many years shared our lives in this monastery. John’s remains will soon be laid to rest beside his friend and fellow master baker Br Oliver in the monastic cemetery. We say goodbye to a familiar face we have known for so many years, to those lovely smiling greetings that said so much without any need for words that we have so often received and will receive no more in this life. We say farewell to a brother monk, a loving brother, a fellow-traveller on the road of life. But it is not a final farewell. Our funeral Mass today celebrates a human life that is changed, not ended, to quote once again the Preface of the Mass for the dead. We entrust John to the Lord. For him a new phase of life has begun. He has passed from our midst into the presence and care and happiness of God. And so today, Br John is our Lazarus. He is the friend whom Jesus loves. And despite the pain of death, we raise our hearts in faith, knowing that God will be glorified through the soul of our dear brother and friend. 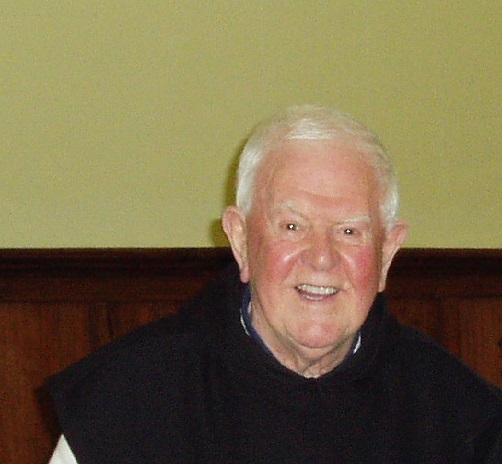