An annual memorial lecture with the theme of Living History will be held to remember Father Peter and the first lecture will take place in the College on the 27th of April 2018 and will be presented by former past pupil and Taoiseach Brian Cowen on the topic of the 20th Anniversary of The Good Friday Agreement.

Father Peter Garvey  July 20th, 1937 – December 2nd, 2014
Father Peter was a former abbot of Bolton Abbey, near Moone, in Co Kildare. He also had the distinction of serving for two terms – a total of 18 years – as president of Cistercian College.

Father Peter followed in his father’s footsteps, enrolling in the school in 1950. In 1955, after completing his leaving certificate, he entered the monastery. He was ordained in 1963 and served as bursar and later as novice master. But when nominated to take charge of the school, from 1972 to 1984 and from 1999 to 2005, he proved himself to be a brilliant educator and leader. He was dearly loved and respected by the boys who passed through Cistercian College under his care, a fact attested to by the great numbers who remained in contact with him long after they had passed into adult life. No fewer than 18 members of the extended Garvey family were educated at Cistercian College between 1918 and 2012.

In 2006, the community at Bolton elected him to be abbot, a role he discharged for six years, after which he returned to his beloved Mount Saint Joseph. The late Father Peter Garvey made an extended pilgrimage to the biblical sites of the Middle East, including Jerusalem between October 2005 and May 2006 after he had retired as Abbott of Moone. When he knew he was terminally ill his final wish was to return to The Holy Land which he did in the company of his friend and past pupil Father Michael O’Sullivan. He died at Mount Saint Joseph shortly after on December 2nd 2014. 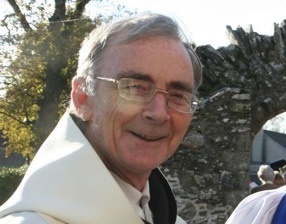