Recognising the Lamb of God

At the heart of today’s gospel are the prophetic words of Saint John: “Look, there is the lamb of God that takes away the sin of the world.” These words should not be new to anyone who knows the Cistercian liturgy. We sing these words every single day of the year in an antiphon, at one of the Little Hours. But why are they so important that we should do this?

The answer is that, in these words, Jesus has been recognised at the beginning of his ministry as the sacrificial Lamb of God. This prophetic bombshell, incomprehensible for those in the days of Jesus to understand, would come to be played-out on the hill of Calvary. He was indeed the Lamb of God. But the title also has meaning for us, personally. Our sins were taken away by this Lamb of God.

Something special happens when St. John confers this title upon Jesus. The Baptist recognised Jesus at their first meeting. It is an understatement to say that John was looking out for Jesus, and his life quite literally became an ‘expectation’ to meet this Lamb of God. But whilst we might easily think that it was easy, therefore, for John to recognise Jesus when he laid eyes on him, it isn’t that simple. Many others at the time were waiting for the new Messiah, were living in a posture of expectation: for example, the religious leaders of the day. But they did not recognise Jesus when he came. Instead, they saw him as an outcast.

John was different. The very grassroots of Johns life was the poverty of Christ, the one-minded desire to know him, to recognise him. If we think about it, poverty is also at the very heart of the title ‘Lamb of God’, not only in terms of the meek animal itself, but in terms of the action of sacrifice. John’s desire must be our desire, too. And so we might ask ourselves: do we live as St. John lived, that is, seeking Christ, waiting, expecting? Do we take on the radical poverty of Christ, making our first steps towards him by becoming like him?

Like St. John, we too are called to be saints. But we have to start somewhere. We want a relationship with Christ, but we can’t have this if we don’t even recognise him. Let us pray, then, for the Grace of Christ’s humility, that, living like him, we may recognise him when he comes to us. Amen.

A reading from the Gospel according to John        1:29-34
“Seeing Jesus coming towards him, John said, ‘Look, there is the lamb of God that takes away the sin of the world. This is the one I spoke of when I said: A man is coming after me who ranks before me because he existed before me. I did not know him myself, and yet it was to reveal him to Israel that I came baptising with water.’ John also declared, ‘I saw the Spirit coming down on him from heaven like a dove and resting on him. I did not know him myself, but he who sent me to baptise with water had said to me, “The man on whom you see the Spirit come down and rest is the one who is going to baptise with the Holy Spirit.”

Yes, I have seen and I am the witness that he is the Chosen One of God.’” 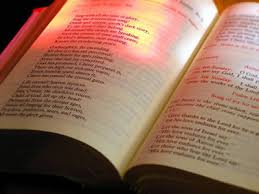