Today we celebrate the Solemnity of St Bernard of Clairvaux. St Bernard dominated western Europe in the first half of the twelfth century. He counselled kings and rebuked popes. He moved in the complicated affairs of men with a dexterity which brought him, in his own lifetime, a reputation for holiness – and created implacable enemies. When he decided to become a monk, he persuaded thirty of his friends and relatives to accompany him. The Cistercians, in Bernard’s charismaticshadow, grew from two small, poor monasteries to over three hundred semi autonomous abbeys. Theirs was an unparalleled explosion of religious fervor. At Clairvaux alone, Bernard ruled 700 monks. Refusing class privilege, they balanced manual labour and liturgical prayer with private reading and solitary meditation. Critical of affluent and comfortable monks, Cistercians ruthlessly discarded everything which might distract them from their goal: the experiential knowledge of God.
Photo: one of our beautiful windows at MSJ of St Bernard. 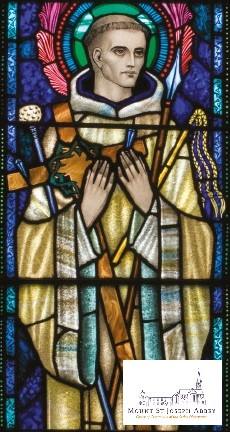