We are Cistercian monks of the Strict Observance and, although MSJ is a small community, there are several thousand Cistercians throughout the world (http://www.ocso.org/). All are united by the Rule for Monks, written by St Benedict of Nursia. Still, Cistercians are only part of the greater Benedictine family: all the world’s Benedictine monasteries follow this sixth century Rule, from Glenstal Abbey in Ireland and the English Benedictine abbeys, to countless other monasteries across the world such as San Anselmo in Italy, St Ottilien in Germany, St Meinrad in the USA, Le Barroux in France and Montserrat in the Philippines. There are also the Cistercians of the Common observance, who similarly live according to this ancient Rule.

This centuries-old Rule continues to lead and nurture western monasticism, as it has done for centuries. Why, then, has it stood the test of time, and how is it that a sixth century document can continue to draw young men and women into monastic life in the 21st century?

Benedict’s was not the first community-based monastic rule to exist, but his was moderate, pliable and accessible enough to allow ‘ordinary’ people to follow it. No longer was it necessary for monks to be super-human in their ascetic practices and liturgical responsibilities. Benedict was a clearly thoughtful, understanding man with a deep connection to humanity and his Rule opened the monastic way to all walks of life. Monastic life contains many rules and boundaries but, throughout Benedict’s teaching, we also find significant emphasis on bearing with other people’s faults, making allowances and allotting advice and material goods according to each personality, rather than expecting everyone to require the same. What St Benedict says of the monastic cellarer is true of all the monks: “…[the cellarer] must not annoy brothers. If any brother happens to make an unreasonable demand of him, he should not reject him with disdain and cause him distress … he must show every care and concern for the sick, children, guests and the poor, knowing for certain that he will be held accountable for all of them on the day of judgment … for it is written: ‘a kind word is better than the best gift.’” (Sir 18:17) (RB 31). He makes special mention of the sick: “Care of the sick must rank above and before all else, so that they may truly be served as Christ…” (RB 36:1); and again: “To regain their strength, the sick who are very weak may eat meat.” (RB 36:9..) Even when he does make specific recommendations, such as in the matter of food and drink, he precedes them with the caveat: “Everyone has his own gift from God, one this and another that (1 Cor 7:7). It is, therefore, with some uneasiness that we specify the amount of food and drink for others.” (RB 40:1.)

St Benedict made it possible for anyone to become monks, from farm workers with no reading skills to the ‘highest’ reaches of society who had received in-depth education. He recognized that any well-functioning community must, by nature, be a microcosm of the world: within such a community, there will be a wide spectrum of characters and personalities. Benedict’s Rule does not teach everybody to be the same, neither does it stipulate that would-be monks must be of one particular personality in order to thrive in the community they join. Instead, Benedict exhorts the monastic community – superiors especially – to be responsive to each other’s needs as they might arise, to allow for monks who can read and who cannot, to allow for weaker monks and stronger monks, to allow for those who may need a little more of something than others, and so on: “Whoever needs less should thank God and not be distressed, but whoever needs more should feel humble because of his weakness, not self-important because of the kindness shown him. In this way all the members will be at peace. First and foremost, there must be no word or sign of the evil of grumbling, no manifestation of it for any reason at all.” (RB 34:3.) Even nowadays, it is not unusual for a Cistercian community to be made up of monks from all walks of life; this has long been one of the great joys of the Cistercian life, and is a direct inheritance of St Benedict.

The Rule, then, is saturated in community-orientated charity. At its heart is a profound and loving understanding of the human condition and how God works on the human soul within community life. By way of example, Chapter four of the Rule, which is titled ‘The tools for good works’, comprises a long, Scripture-based list of rules by which we can live a life of charity within the monastery. The following, an excerpt from the end of the chapter, is worthy of memorizing, and can be used as a morning and evening prayer:

“Do not aspire to be called holy before you really are, but first be holy that you may more truly be called so. Live by God’s commandments every day. Treasure chastity; harbour neither hatred nor jealousy of anyone, and do nothing out of envy. Do not love quarrelling; shun arrogance. Respect the elders and love the young. Pray for your enemies out of love for Christ. If you have a dispute with someone, make peace with him before the sun goes down. And finally, never lose hope in God’s mercy.”  (RB 4: 62-74.)

This short excerpt is a rich window into Benedict’s mind-set. Firstly, he warns against putting trust in the way we view ourselves – after all, do we not all need this reminder, sometimes? He then gives us a succinct list of dos and don’ts, all of which take life-long dedication and effort. But he finishes with the closing phrase: “And finally, never lose hope in God’s mercy.” By so doing, Benedict is admitting to himself and to his monks that we will fall, that we are not perfect, that the way we have chosen will not be easy. These words remind us that, above and beyond ourselves, we depend on God alone for our sanctification; as St John put it: “If our heart condemns us, God is greater than our heart.” (John 1: 3.) It reminds us that everything is possible by the mercy of God, despite ourselves.

Benedict invites us to see Scripture in 3-D. For him, the bible is not some dry, historical document, but a living, urgent, challenging agency of God Himself; within its pages we are quite literally drawn into His presence. St Benedict weaves Scripture into his words, not at all as a writer who inserts quotes from a reference Bible, but as a man who lives and breathes Scripture. It becomes clear throughout his Rule that St Benedict lives inside the Gospel message; the words are imprinted on his heart. He uses the Word of God organically and this translates naturally into his written word. Scripture is a personal message for him, and it is for us, too.

The Rule is heavily Scripture-based; even when not directly quoting from Scripture, Benedict’s words live in its spirit of charity. The Gospels, as already said, are for now, they are ever new, ever challenging us, ever shape-shifting into our life and culture. So it is a beautiful thought that the long-time and far-reaching success of the Rule is because of this mysterious newness of the Gospel message on society and on the individual. St Benedict’s Rule for monks is a flowing river of Scripture, a torrent of Gospel waters, an engineered waterway that we have shaped and positioned so as to water our monastic fields and give us sustenance. Benedict made this water accessible to all, by imbuing his Rule with a sense of moderation and human understanding: “Yet, all things are to be done with moderation.”  (RB 48:9.)

The walls of this waterway are built out of attentiveness, openness and listening. In the posture of attentiveness, we can receive the Word of God; such a posture holds the Gospel message, and allows it to flow. Sustaining this posture means humility, remaining open to others, checking one’s self, and all the attributes advised by our Holy Father St Benedict. Throughout the Rule, and even from the first sentence, Benedict exhorts us to listen, and to remain open to the Word of God: “Listen carefully, my son, to the master’s instructions, and attend to them with the ear of your heart. This is advice from a father who loves you; welcome it, and faithfully put it into practice.” (RB Prologue, v1).

Beyond the listening, Benedict is a man of action. Just as the Gospel message is for us, now, so he also wishes us to respond to the Word with a certain joyful urgency: “This message of mine is for you, then, if you are ready to give up your own will, once and for all, and armed with the strong and noble weapons of obedience to do battle for the true King, Christ the Lord.” (RB Prologue); and again: “Is there anyone here who yearns to see good days? … What, dear brothers is more delightful than this voice of the Lord calling to us? See how the Lord in His love shows us the way of life.” (RB Prologue.) 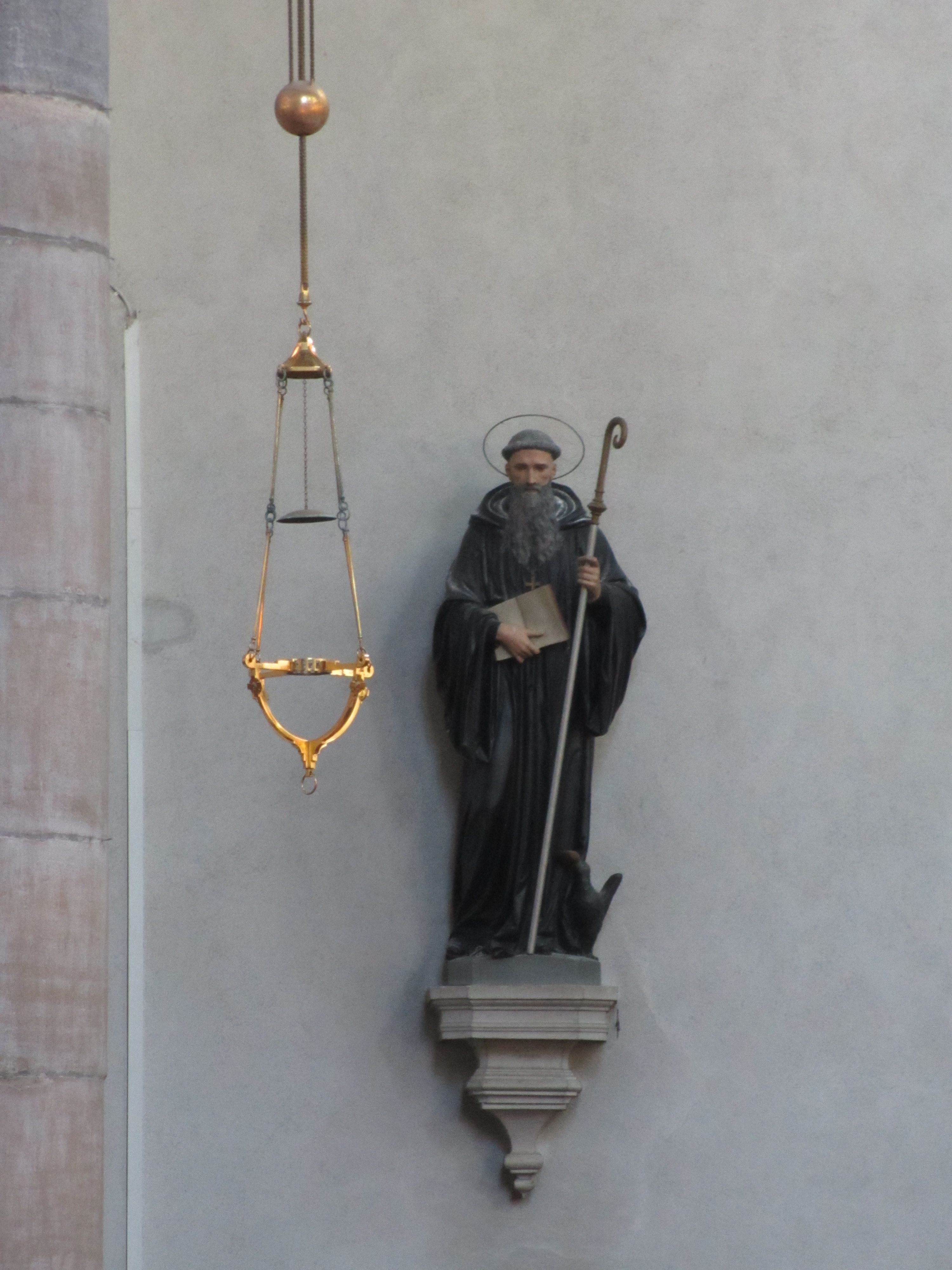