Today’s Gospel reading (which is included at the end of this reflection) is the feeding of the five thousand according to St John. I think we all know this passage; even non-believers use it as a reference point for the kinds of miracle work they do not believe in: ‘What are you expecting,’ you may hear them say, ‘the feeding of the five thousand?’

One of the great challenges when reading Scripture is calling to mind the event itself, as it unfolded within the cultural setting of the day (what biblical scholars call the ‘Sitz im Leben’ – or ‘setting in life’). The extraordinary nature of these happenings can slip through the fingers of time, and we are left with a normalized story, disinfected and beaten-down by popularity and age: the wonder has vanished. It has become a far-off story that everyone knows.

There is an effective and ancient way of praying Scripture, a monastic practice still used by us Cistercians, called lectio divina. The prayer, which can be made individually or in a group setting, asks us to step inside the Gospel by the road of ruminating on a short passage of text, over and over again. We place ourselves in the story, which is tantamount to coming into Jesus’ presence through Scripture regardless of whether we ‘feel’ like we are with Him: Our Lord sees that we are knocking at the door by using His presence in Scripture, and this is a powerful prayer.

There is an important, two-fold aspect to this prayer. The first is to have (at least) some basic understanding of the cultural setting of the day in which the passage was written. Only then will the reader glean what is actually happening in the story; we must remember that biblical times represent very different ‘Sitz im Leben’ to ours in the 21st century. The second aspect is to allow yourself to see your own life in the Gospel message, and to ask the Spirit to make known what this particular passage means to you, personally. By walking around inside the Gospel, we bring it back with us into our daily life, and we begin to see life through a different and more attuned lens.

Jesus’ first concern was for the five-thousand-strong crowd. These people had no recourse to a service station or a conveniently local drive-thru; having walked miles to hear Jesus speak, they needed two things: food and rest. So He made it His responsibility to feed them, and we all know that He did this by performing a miracle. The miracle unfolded within community recreation, we might even say under the cover of it. Perhaps people didn’t even notice the truth of the miracle until they had had their fill. It is possible to say that the effects of the miracle were measured only at the very end when the baskets of left-overs were filled.

Notice also the bare beginnings of the miracle: a little boy with some bread and fish. There was nothing special about this boy, he didn’t know what part he would play in the feeding of such a large crowd. So Jesus began the miracle on the kind of social level that nobody really notices, or rather, on a social level that is so deeply ingrained in our culture that there is nothing special about it.

In a difficult situation, we might be tempted to ask: ‘What are you expecting, the feeding of the five thousand?’ But, just like we run the risk of forgetting the urgency of the Gospel message (both in its own day and in the 21st century), so we can also forget that we are surrounded by miracles every day of our lives. We are surrounded by children carrying loaves and fish: they are our family and friends, our co-workers, they are the places and times when we sense God’s presence, they are our temptations and our sorrows, they are the way we write and interact on social media. All of these are the unexpected opportunities for growth in Him.

And we are surrounded by the leftovers of His miracles: the great goodness of our fellow humans, the beauty of nature and all living things, the complexity and fragility of creation, our own personal sense of spiritual growth, the amazing spirit of human nature which strives to create and love and see and learn. All of this is a dazzling lightshow of miracles, before our eyes, inside them and behind them.

The crowd had journeyed a long way to see Him. Coming without sustenance for the journey suggests two things: poverty and urgency. They recognized that they were poor yet they came anyway, despite the possible consequences of hunger and thirst. And Jesus responded, just as He responds to our hunger and thirst. The crowd recognized a second need: to act. They were caught up by the urgency of Christ’s message. It meant something to them, there and then. Whatever the obstacle, be it tiredness, hunger, illness or poverty, they made their way into His presence.

The actions of this crowd is what Jesus asks of us. He asks that we put nothing before the love of God, and He asks us to recognize our poverty so that we may come to Him in truth, to receive the kinds of sustenance that all the world’s wealth cannot give.

How often do we stop to acknowledge His miracles? We are all guilty of this, to greater or lesser degrees. How many opportunities missed! The very term ‘miracle’ can be misunderstood, even by Christians. A miracle has become something like a sudden healing and, if we do not get it, we feel either that God does not care or that we’re not praying properly. But we forget that we are living within the mystery of faith, that we do not understand fully, as God does. We forget to commit our spirit into His hands, so that He may transform us; after all, that is what miracles are about: transformation.

Humankind sometimes does not like to feel like there is any being greater than it. Miracles are often hidden inside failure and brokenness, pain and suffering. As St Paul said: “When I am weak, then I am strong.” Yet we can all run the risk of demanding the kinds of miracles from God that simply mean we shall never suffer, just like the Israelites in the desert: ‘In their heart they put God to the test by demanding the food they craved.’

Ultimately, Jesus gives the crowd food and rest. And it is the same for us. He tells us that ‘My yoke is easy and my burden is light’ and He feeds us with His very self: ‘…for my flesh is real food and my blood is real drink’. His reaction to the five thousand is also His promise to us: Jesus will support us – He will respond to our needs – not perhaps in the way we might expect, but His miracle of love will rise from the cracks in our pavement, those parts we usually pay no attention to, or think as ordinary. His presence transforms everything and comes when – and where – we often least expect it.

Some time after this, Jesus crossed to the far shore of the Sea of Galilee (that is, the Sea of Tiberias),  and a great crowd of people followed him because they saw the signs he had performed by healing the sick. Then Jesus went up on a mountainside and sat down with his disciples. The Jewish Passover Festival was near.

When Jesus looked up and saw a great crowd coming toward him, he said to Philip, “Where shall we buy bread for these people to eat?” He asked this only to test him, for he already had in mind what he was going to do.

Philip answered him, “It would take more than half a year’s wages to buy enough bread for each one to have a bite!”

Another of his disciples, Andrew, Simon Peter’s brother, spoke up,9 “Here is a boy with five small barley loaves and two small fish, but how far will they go among so many?”

Jesus said, “Have the people sit down.” There was plenty of grass in that place, and they sat down (about five thousand men were there). Jesus then took the loaves, gave thanks, and distributed to those who were seated as much as they wanted. He did the same with the fish.

When they had all had enough to eat, he said to his disciples, “Gather the pieces that are left over. Let nothing be wasted.” So they gathered them and filled twelve baskets with the pieces of the five barley loaves left over by those who had eaten.

After the people saw the sign Jesus performed, they began to say, “Surely this is the Prophet who is to come into the world.” Jesus, knowing that they intended to come and make him king by force, withdrew again to a mountain by himself. 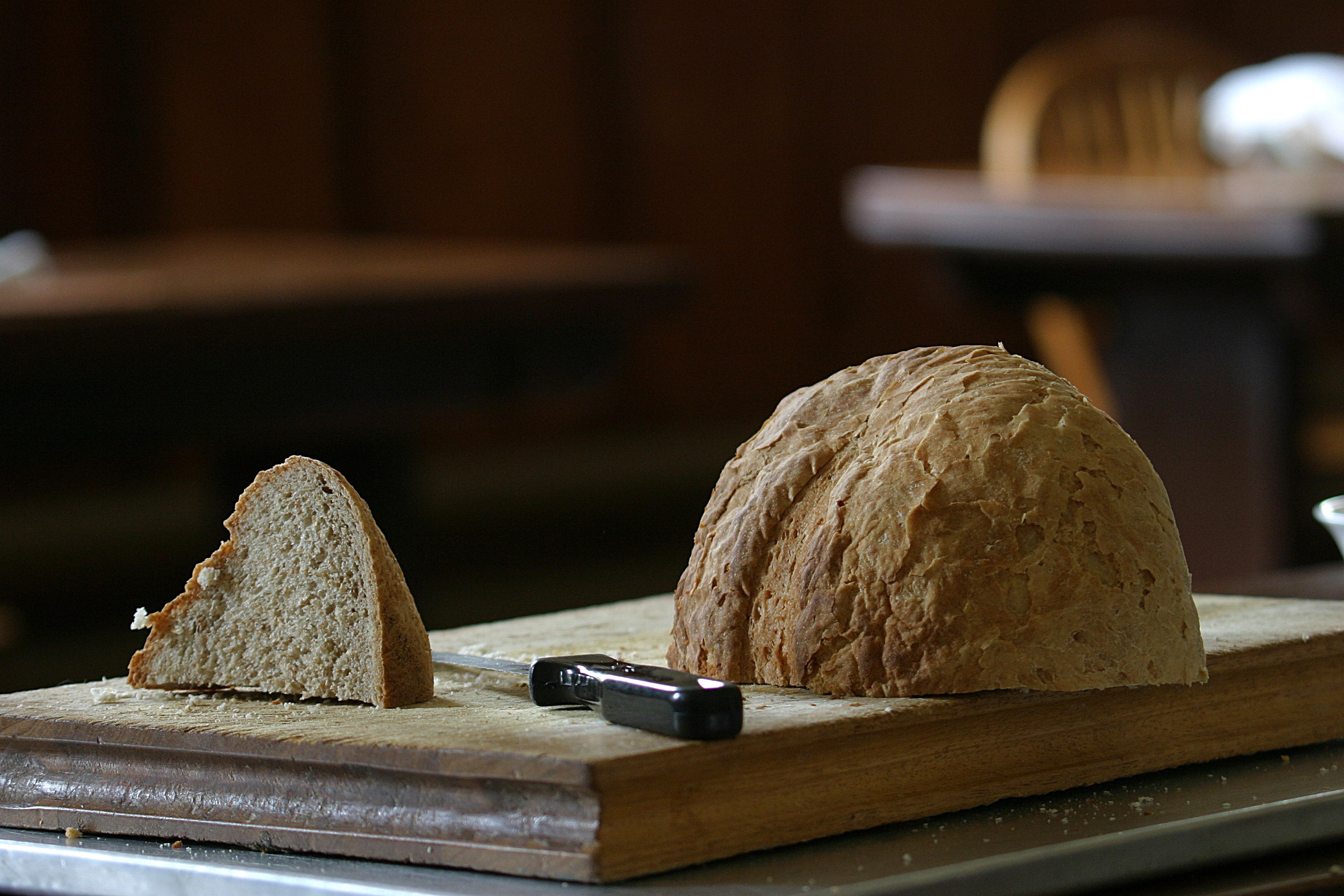