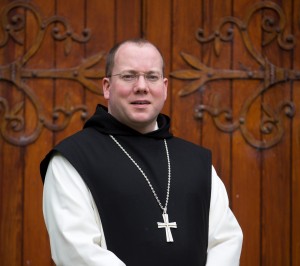 I was born in 1976 and grew up in Dublin, the eldest of four children. I can’t really remember when the idea first came to me, but from at least before I was ten I can remember thinking that I’d like to be a priest. I don’t know what the attraction was, but the whole idea really appealed to me, looking back it seems like it was always there, probably nurtured by my experience serving Mass and being involved in music and choirs.

Music was always a big part of my life. From the age of four or five I used to bang out tunes on the piano and couldn’t wait to learn how to play it properly. I loved singing too, and was always involved with choirs and musicals during my teenage years. When I left school I studied Music, French and Italian in college.

The idea of being a monk came towards the end of my time in school. When I was about 16 a priest from school took a group of us down to Kylemore Abbey for a weekend. Kylemore is a monastery of Benedictine nuns in Connemara and Fr Peter used to spend August there as chaplain. He took us down for a bit of a holiday, but for me it was a real eyeopener. Before going there I knew nothing at all about monasteries or monastic life.

That weekend in Kylemore was my first experience of the sung Liturgy of the Hours and it made a huge impression on me. Before that my only experience of Church and liturgy was Mass. But here was a group of people living and working in community who met together several times a day in the Church to sing hymns and psalms together. It really appealed to me – perhaps initially more from a musical point of view rather than on a spiritual level, but I have come to realise that God often uses external things like music to attract us and only later do we realise that he is calling us to something deeper.

After that first experience of monastic life I began to get interested in monks and monastic orders. At first I was reading about Benedictines, I had probably never heard of the Cistercians at that stage. There was only one Benedictine monastery in Ireland at that time and I found myself looking up monasteries in England. The desire just became so strong in me, it’s hard to describe, but deep down there was this really strong attraction, or perhaps by now I was feeling it as a ‘call’.

One day in the school library I came across a copy of An Fiolar, the yearbook of Cistercian College Roscrea. This was my introduction to Cistercian life and Mount St Joseph Abbey, Roscrea. Even though it was a school annual, it was the edition from 1989, the year of the silver jubilee of the election of Dom Colmcille O’Toole as abbot and there were several articles about the monastery and monastic life at Roscrea. I can still remember the feeling I had reading that book and looking at the pictures. It just jumped off the page at me. Deep down I knew something was going on inside me. It was like an internal chemical reaction.

Of course at this stage I kept all this to myself, I had never really spoken to anyone about it. In one way I wanted it to go away, but at the same time I didn’t want to think of anything else. When I was in sixth year I had do decide what I was going to do after school. It was still usual at that time for lads to go straight into a seminary from school, but that didn’t hold any attraction for me anymore. I hadn’t spoken to anyone except a priest friend about monastic life, so I applied to do Arts in UCD and got it.

In early 1994 I wrote to the Vocations Director at Mount St Joseph Abbey looking for information about the monastery and received a letter from the Novicemaster enclosing some literature and inviting me to visit. As I was going away immediately after the Leaving Cert but had a gap of eight days in the middle of my exams I went down to Roscrea for a weekend. It seems like madness now to go away in the middle of the Leaving Cert but that was what I did. When I got to Roscrea and saw the place I experienced the very same thing as when I first opened the pages of school annual, An Fiolar – something deep inside told me that this was the place for me.

From talking to other people I realise that this certainty about a religious vocation is quite rare, and many people on the other hand find it hard to discern if the Lord is really calling them to religious life. So I while I had doubts and fears and certainly didn’t see everything clearly, deep down there was an inner peace – it just felt right for me. But my monastic journey didn’t end there. After school I went to UCD as planned and really enjoyed college life. I got involved in lots of different activities, mostly musical things, and had a really full and busy life. Throughout my first year in university I visited the monastery at Roscrea a few times and got to know more about Cistercian life and Mount St Joseph Abbey.

During the summer of 1995 I spent a month on a ‘live-in’ and that experience really confirmed everything for me. So much so that when the month was up I didn’t want to leave, and wanted to stay on and enter, and I certainly didn’t want to go back to College. By this time I had brought up the whole question with my parents. That was a big thing for me as I had never really spoken explicitly about priesthood or a vocation to the religious life with them before, though I’m sure they had guessed. I remember my mother saying clearly that I had to finish college first and I could do what I liked after that! At any rate there was little chance of me been taken into the monastery at 19!

My second year in college was difficult. I didn’t really want to be there, my mind kept retuning to the monastery in Roscrea and I’d find myself looking at my watch and saying to myself ‘the monks are going into dinner now’ or ‘the monks are at Vespers now’. I suppose in one way that confirmed me in my discernment, but I remember it being a difficult time, wondering could I stick monastic life and was it really what the Lord was calling me to or was it just my own will?

By the time I got into third year in UCD I was a good bit more settled and living university life to the full. As I approached my finals I had to make a decision. Everyone was deciding what they would do after the degree. I knew what I wanted to do but didn’t know if I had the courage to do it. I could have applied for the H Dip or I could have done a masters. But this monastic thing just would not go away, so I decided that I’d have to give it a go and if it didn’t work out I’d have got it out of my system!

The next thing was to tell my friends. There were only two friends in college who knew that I used to visit the monastery some weekends. I remember being in a pub one evening with two other friends and the subject came up about what we were all doing next year. I told them that I was going to join a monastery and they nearly fell off the bar stools. They just couldn’t believe it at first. But when I talked a bit about it the pieces fell into place for them. To be fair they were always most supportive and have remained friends to this day.

So I entered Mount St Joseph Abbey in August 1997. It certainly was not easy, but anything worthwhile is not easy. I often joke that I entered expecting to be gone by Christmas but that I’m staying until next Christmas. Looking back after sixteen years I can see how much I have grown and developed over these years. Despite all my many failings in living it, I love monastic life. It gives me a freedom to be myself, and that’s very important. I love the liturgy, the community life, the music, and all the things and people that make up Mount St Joseph. Some people think I was very young to join at 21 – for me it just felt like it was the right thing to do, and I’ve no regrets.